Michael Littig is an actor, teaching artist, and theater maker.

Internationally, he has performed in A Dreamplay (United Arab Emirates), Juárez: A Documentary Mythology (Mexico/UAE/Lebanon), HEARTPIECE (Mongolia), and Hamlet / Ur Hamlet (UAE) as an associate artist with New York/Abu Dhabi-based Theater Mitu. Michael (along with Theater Mitu members) has diligently continued various global research initiatives towards a continuous development and articulation of Theater Mitu’s training methodology Whole Theater. Most recent training initiatives have traveled Michael and Mitu to Japan, India, Mongolia, and the Middle East. This has led to trainings and collaboration with some of these cultures’ most important masters.

Michael has served on faculty at the NYU Graduate Actor Training Program, Shakespeare Society, Stella Adler Conservatory, in addition to teaching workshops in Kenya, Mexico, Egypt, UAE, Japan, Mongolia, and India. His awards and recognition include: the NEA Arts Works grant, the MAP Fund, the NEFA Touring grant, the CEC Arts Link, and a Fulbright Fellowship to examine the relationship between a shaman and an actor in Mongolia.

Currently, Michael continues to collaborate with church communities in both Gainesville, Florida and New York to develop new theater engagement techniques in collaboration with the NEA and the Workcenter of Jerzy Grotowski and Thomas Richards in Italy, in addition to developing a piece with Theater Mitu on soldiers returning from war both in the USA and the Middle East.

He is a proud member of the Grand Unicorn Experiment at Mark Fisher Fitness, co-founder of the Patrick Page Studio in New York City, and co-founder of Congregation Coaching.

Michael holds a BFA in Drama from the University of Cincinnati (CCM), where he received the distinguished alumnus award for career excellence, and is a Fulbright Scholar (Mongolia). Based in New York, he continues to create, develop, and present work in the US and internationally. 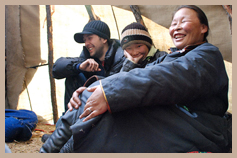 Julianna Bloodgood’s work largely consists of community based projects and artistic outreach, as well as anthropological performance research and creating ensemble based original works. Julianna is a resident artist with Theater MITU, www.theatermitu.org, and has collaborated with the company in Thailand, the United Arab Emirates and the USA. She is a graduate of The Pacific Conservatory of the Performing Arts, holds a BFA from the University of Cincinnati, College Conservatory of Music, and an MA from Manchester Metropolitan University in conjunction with Teatr Pieśń Kozła of Poland. She currently resides in Wrocław, Poland, where she continues her work with Teatr Pieśń Kozła through the pedagogical and performance research ensemble Oriri. www.piesnkozla.pl/

Julianna is the proud co-founder and artistic director of The Dadaab Theater Project, a youth based theater project in Dadaab, Kenya, the world’s largest refugee camp and a founding member of The Great Globe Foundation. She has been a key collaborator in the True Body Project, www.truebodyproject.com, dedicated to empowering girls -and all community members- to identify and stay in their true bodies and maintain and grow their authentic voices and has worked with hundreds of community members in the greater Cincinnati region. Julianna has acted as a community and theatrical facilitator for numerous projects, including the International People’s Project theatre workshop on contemporary slavery, and with the Drop Inn Center, homeless shelter of Cincinnati and is currently collaborating with Oriri on Jubilo, an artistic endeavor to engage with excluded peoples and youth in the city of Wroclaw through sound, movement, and rhythm.

Julianna has an extensive background in dance and voice, and is a teacher of yoga and Pilates. She has served as a faculty member at the College Conservatory of Music (CCM), department of Drama and department of Dance and has since returned as a guest teacher.

Ms. Bloodgood has studied with Anne Bogart and members of the SITI company, Theater MITU and the Patravati Theatre of Bangkok, Marcello Magni of Complicite Theatre Company, Frans Winther of Odin Teatret, Jola Cykutis of Laboratory Theatre and Second Studio of Wroclaw, and extensively with members of Teatr Piesn Kozla (Song of the Goat Theatre) in Wroclaw, Poland. 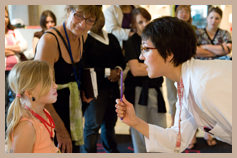 Gayle Hallows Stucki M.Ed. is Co-Founder of The Great Globe Foundation and serves as the Executive Director. Gayle has a Masters of Education degree from Utah State University and a B.A degree in Broadcast Communications with a three-tier emphasis in Theatre, Journalism & Business. She also has a minor in Music and worked as a professional musician. Ms. Stucki is a Certified Educator in Theatre, Speech & Debate, and Leadership/Student Government. She has worked over the past 20 years as an Educator with special emphasis on pioneering programs that enable youth to have access to excellent experiences and education in the Arts. Her vision and goals have culminated in the creation of The Great Globe Foundation as a nonprofit organization dedicated to serving worldwide youth and their communities by providing opportunities to explore common humanity and self-actualization through engagement in artistic education programs and multi-cultural communication.

Gayle is married to Clay W. Stucki, of Stucki, Steel and Rencher, LLP. She has five children and says she has received much in the way of education and benefit from the opportunity of being a mother to them!

Arianna Stucki is an actor, playwright, and theater-maker who has looked up to the work of the Great Globe Foundation since she was 10 years old.

Arianna has traveled to 16 different countries in the past 3 years and studied the different theater practices of each region. She has acted alongside Kathakali masters in India, Irish farmers in Connemara, and Holocaust survivors in Wroclaw. She has trained in acting under Anne Bogart and the SITI Company, the Workcenter of Jerzy Grotowski and Thomas Richards, Theater Mitu, Patrick Page Studio and NYU Tisch’s Classical Studio.

Arianna has a deep investment as an actor and playwright in rewriting our contemporary mythology to re-include myths and stories from around the world on the subject of female experience. Currently, she is writing and rehearsing an adaptation of John Fletcher’s The Woman’s Prize which focuses on the names and stories of female ancestors we have forgotten, and must attempt to remember.

She can’t wait to continue her relationship to the Great Globe Foundation as an Artistic Associate, the foundation that showed her as a little girl how vast human experience is, and how telling stories can indeed enact global change.   Onwards.

Arianna will graduate with an Honors BA degree in Theater Arts from NYU: Abu Dhabi in May 2018, following which she will pursue her MFA in Acting at Juilliard.