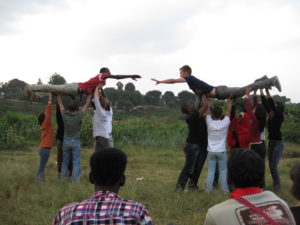 Beginning in February, 2011, we embarked upon a journey that not only fundamentally changed our lives but became a defining moment for ourselves as individuals and as artists. In the desert of North-Eastern Kenya near the border of Somali, lies the world largest refugee camp: Dadaab. Now home to over 460,000 refugees from the surrounding countries torn by war and famine with more people crossing the borders daily to seek asylum in Dadaab’s three refugee camps.

We went there with one mission; to create a theater project with refugee youth. Our work was founded on a desire to learn and recognize our own humanity in the face of others, especially voices from different perspectives in the global community. We believe deeply in the ritual of theater, that with generosity and curiosity, we can engage in a basic fundamental need to connect with the notion of what it means to be human. As artists, we believe in the power of art to unite people and to heal even the most broken spirits. When we first arrived in Dadaab, we asked the youth what they wanted from us, they responded that they wanted their voices to be heard outside of Dadaab.
And to this we dedicated our work.

The Dadaab Theater Project was created by Michael Littig and Julianna Bloodgood of The Great Globe Foundation in partnership with Filmaid International with support by UNHCR, Save the Children, and the US Department of State. There are several goals we worked towards. Most importantly, we wanted to create a self-sustaining arts education curriculum within the Dadaab refugee camps. In our work, we use theatrical facilitation as a tool for communication, expression, transformation, and healing; we wanted to inspire and guide the refugee youth in creating their own opportunities and platforms for positive personal and community change.

We created The Dadaab Theater Project, a performing company of diverse youth that trained five days a week for five months in voice, movement and dance, poetry and acting techniques, as well as in traditional forms. With this group, we worked with elders in the communities and masters of traditional arts to train our company and created an original piece of theater centered around the theme of personal identity.

Through our work with the Dadaab Theater Project, we aimed to create platforms for the exchange of art and culture between students in the United States and the refugee youth of Dadaab. These theatrical engagements and collaborations connected the voices of the different African cultures within the camps as well as linked generations. Our work in this regard culminated by bringing university theater students from the University of Cincinnati, College Conservatory of Music, Department of Drama, to train with our refugee youth performance company and together we created an original piece that we performed as part of the UNHCR’s World Refugee Day festivities in Nairobi. This unique and first annual collaboration took place during a retreat to Naivasha, Kenya, from June 16-19 leading up to World Refugee Day on June 20th, 2011.

The other facet of our work within Dadaab was working within Save the Children’s Child Friendly Spaces to creatively engage with children. Through this work, we designed and implemented a “Creative Engagement and Facilitation Handbook”, and then trained the refugee staff members of Save the Children within the camps to use these tools of play and creativity. We also worked with the Save the Children, Children’s Clubs, and created a Leadership and Drama Club, engaging in activities such as poetry writing, creating plays, storytelling, and collecting and presenting data from the community for the UNHCR and US Department of State’s intended new libraries within the camps.

One of the unique features about our work in Dadaab, is that we strongly believe in the power of the individual voice and utilized personal stories, original poetry and songs, as well as traditional art forms together to form the foundation of our theatrical work. We are interested in the question of Identity and how each of us can bring forth an authentic representation of ourselves and our culture in a piece of theater that can be shared and experienced by the local community and audiences outside of Dadaab.

The first phase or our work in Dadaab lasted for five months, from February to June, 2011. While working with the refugee setting, we discovered the pain and harshness that exists there and that people carry within them such deep and harrowing stories of suffering, torment and pain like we’ve never heard before. But, what we quickly discovered is that within every person here, who has escaped death, fled genocide, lost their families and have endured unimaginable hardships, there is something that exists, that rises up and clutches onto life; it is the ultimate will and strength of the human spirit. We have learned that love is the strongest power on this planet and that hope is the essence of life, stronger than steel, stronger than death. Because of the relationships forged in Dadaab, we are inspired every day to be stronger human beings, and persons of integrity and love.

Above all, we have discovered that there are many stories in Dadaab that deserve to be told. As artists and citizens of this planet earth, we are dedicating our work to the telling of these stories. Thank you, to the inspiring voices that have touched and changed us; the people who have opened their hearts to us and let us into their lives, we will never be the same. And thank you to our partners, Filmaid, Save the Children and UNHCR. Without your generous support, none of this would have been possible.

This project has continued to grow into many forms over the past 8 years, including new collaborations and exchanges between youth in Dadaab and the United States. We are currently engaging in a poetry exchange between young Kenyans and youth in Alabama, USA, called the Real Global Poets project. For more information, please visit The Real Global Poets.